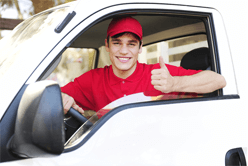 A house fire is reported in the United States every 90 seconds. Fires are common and the damage that they cause can certainly be devastating. San Diego fire damage doesn't stop when the flames get put out. Smoke damage is often just as destructive, and sometimes even more so, than the fire that caused it. To fix fire damage we need to understand what smoke really is.

We all know that smoke comes from fires. But, what exactly is smoke? Basically defined smoke is a combination of liquid molecules, gasses and tiny solid particles that are created when things burn. Fires often lack enough oxygen to burn everything completely. When this occurs, the unburned substances become smoke. Smoke generally comprised of carbon (also known as soot), wood tar, oils, ash and various chemicals.

When a fire is put out smoke seems to dissipate, but this is often an illusion. As the air cools down the floating smoke particles settle creating a thin film-like coating on surfaces and items nearby. The substances in smoke are then able to start damaging your items. Let's take a look at a few compounds in smoke to understand how they cause damage and how to fix it with smoke damage remediation.

Smoke Odor: Anyone that has ever been around a fire knows that smoke carries a very definite odor. This odor is often stronger in building fires due to the burning of plastics and other synthetic compounds. This smoke odor requires special cleaning measures to be removed. Air fresheners and sprays may mask the odor temporarily, but cannot remove it. Special treatments are needed to break down the smoke molecules and remove the odors.

What Can You Do?

The effects of smoke damage can be greatly reduced by acting quickly with smoke damage remediation. Once a fire damaged structure is deemed safe for reentry, get to work. DIY restorers need to start working quickly to dry wet items, provide air flow and start cleaning soot and smoke from items. If you are working with a restoration company, contact them immediately. Many companies offer 24 hour emergency response. The sooner you start eliminating smoke and soot from your building, the less damage smoke can cause.